On March the 31st, angry whistles broke the silence around the Castle of Prague in the Czech Republic. A group of people was shouting „Demokracii!“ out loud around the statue of the first president of Czechoslovakia, Tomáš Garrigue Masaryk, right outside the Castle. As if looking for a dialogue with him, the screamings demanded democracy and immediate action to re-establish the authority of the rule of law, undermined by who is ruling the Czech Republic at this moment.

The reason for the anger of the crowd dated back to a few days before, on March the 29th, when the Czech Republic president, Miloš Zeman, publicly announced his pardon to the director of the Lány Forest Administration, Miloš Balák, whom a court sentenced for influencing a two hundred million contract in Lánská obora.

The Lány Forest Administration is a contributory organization of the Office of the President of the Republic, and Balák is a subordinate of the President’s Chancellor, Vratislav Mynář. On March the 24th, sentenced to prison for three years by a court for influencing a CZK 200 million public contract, Milos Balák was also ordered to pay a fine of CZK 1.8 million and given a four-year ban. In front of his guilt, the president’s response was not long coming.

The crowd gathered outside the Prague Castle was screaming „Mafia“ while demonstrators prepared themselves to give a speech in front of Masaryk’s statue, who was impassibly observing the scene.

Among the crowd, a PhD student at Charles University is one of those who took the street of the capital Prague. As vice-president and spokesman of the „Milion Moments for democracy“ NGO, Jiri-Jakub Zévl ensured that the organization of their demonstration was going according to plan.

„The amnesty is a competence of the president, but the reason for the pardon was not a legitimate reason like altruism. The reason is apparent: he did that because Balák is his co-worker,“ he told me. It is not the first time that „Milion Moments for democracy“ organized a demonstration. It twice filled Letna park in 2019 during protests against former Prime Minister Andrej Babiš (ANO).

„We try to encourage civil society to be interested in politics and local affairs and think about their responsibility, actions, and the fate of their country.“ Jiri-Jakub Zévl continued, „it is our duty to say, this is not normal, this is not how a president should behave. It should also be the quality of the next president that will run next year, not a president who will break all those fundamental rules of democracy.“ Then in a sort of ritual, key members of the NGO put pig masks on their head to give their speeches, in an allegorical but vivid representation of the Czech political situation.

Indeed, the president’s choice to favour personal interest while preserving private affairs reflects a pattern of Czech republic politics. In July 2021, the Rule of Law Report, part of the European Union’s efforts to promote its founding values, called out the Czech Republic for having found shortcomings in implementing the Czech anti-corruption strategy. Moreover, according to the European Commission’s Rule of Law Report, even though the Czech Republic is still dealing with conflicts of interest at the level of government.

Prague Castle is known to have one of the best views over Prague. In front of the panorama, the angry whistles had suddenly shut down to provide enough silence for reading the last chapter of George Orwell’s masterpiece, „Animal Farm“, about how power leads to corruption within society.

Among the now-silent crowd, there was Michael Myšák Vácha, volunteer and illustrator for the „Milion Moments for democracy“ NGO. „We decided to do the protest here in front of the Castle of Prague, not only because it is an important symbol, but also because there is the statue of Tomáš Garrigue Masaryk in front of it.“ He said. „We did the protest under his eyes to highlight the importance of his moral example for the Czech Republic, which Czech presidents nowadays don’t have.“

The morality of Miloš Zeman had, indeed, been challenged several times due to the contradictions between his political choices and promises. „I am voluntarily relinquishing these rights for myself, and I would like the Constitution to be amended so that any successors cannot abuse the institute of amnesty or pardon in any situation. This is one of the responsibilities of my presidency,“ he said in his first statement inauguration in March 2013. With Balák’s pardon, his words seem to be not trustworthy anymore.

However, this is not the only reason president Miloš Zeman created an environment beyond the law inside and outside the Castle. In a resolution, the Czech Senate heavily criticized how he conducted the pardon and defined it as „unacceptable in content and justification, both politically and legally“. Indeed, two days after the final verdict that declared Balák guilty, the Regional Court in Prague did not have a copy or written statement of reasons for the judgment. In the meantime, Zeman did not wait for it before publicly stating his pardon, wiping off the court verdict in an explicit act of power abuse.

The protester had finished reading the chapter; the public verdict was clear: Czech citizens do not recognize Miloš Zeman as president and ask for his resignation from a democratic state where they do not feel represented.

In response to Zeman’s pardon, Balák sent to the daily Deník N a written statement „My family and I are personally grateful to the president for holding me back at a crucial moment in my life.“ He wrote: „from the moment I applied for clemency, I knew that if successful, the same media would hunt me down and lynch me.“ Defending himself as an innocent man, Balák blamed the Court for having been „the victim of a politicized investigation.“ According to the head of Lánské obory, the Court illegally conducted his case.

On the other side, Zeman fastly explained and defenced himself about Balák pardon during an interview for the daily MF Dne. „He did not get rich. There was no economic damage.“ He added, „he is an innocent man, with whose work I am very satisfied“. However, Balák’s absolute innocence needs to be questioned before being defended at all costs. Indeed, he is now facing another judicial case at Kladno District Court concerning the stone mining in the Lánská Game Reserve. Lawyers and judges are examining if he violated the obligation to manage other people’s property.

In the absence of equal treatment, the rules only apply to some. By doing this, Miloš Zeman and his officials‘ political and ethical behaviours are heavily corroding citizens‘ trust in the policies and functioning of the state.

As Jiří-Jakub Zévl stated, the reality of politics is now more than ever closer to the fiction presented in Orwell’s book. „At the end of the book, the pigs become the same as their owners and masters. We demonstrated this; we almost correctly said, „all animals are equal, but some are more equal than others“.

„I think this quotation fits this situation here,“ he said, referring to Mynář’s case. Three years ago, at the beginning of the corona pandemic, Chancellor Mynář had a party with fellow politicians in a slaughterhouse to kill a pig. In defending himself from the accusations of not respecting the law, Mynář argued that the pig needed to be killed because it was sick and would die. He also said that participants did rapid tests. „The pig was hungry“ said Zeman in his defence, a statement easily manipulatable in metaphoric guessing of whom the pig could be. As Orwell would say: „The creatures outside looked from pig to man, and from man to pig, and from pig to man again; but already it was impossible to say which was which.“

„The pig is a perfect metaphor for the Chancellor and the Czech Republic president. The story fits very well with what is happening in this beautiful Castle“, the protester added.

The Czech Republic will have a new head of state in less than a year. While Miloš Zeman won’t be eligible to run again, there could not be a better choice. Andrej Babiš, the former prime minister who abused the ownership of thirty per cent of the private media market and manipulated his media content, is one of the favourites in the upcoming elections. The disadvantage of the conflict of interests and corruption is evident also in the Babiš case. The future horizon of Czech democracy could probably not present a scenario different from the present one. 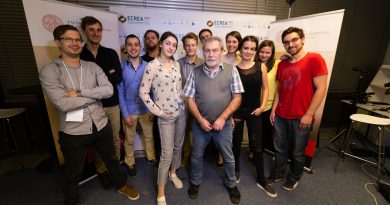 On journalism in the Midwest 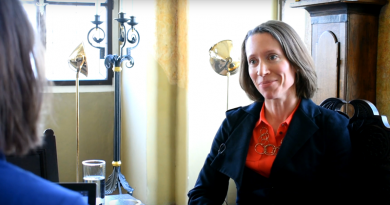 “I understand why lots of Brits have made this country their home.”