Feyenoord fans gather at Old Town Square before meeting Slavia in thequarter-final of the Conference League.

Champions League, Europe League, and with a little less enthusiasm is new inline the Conference League. To some the least exciting European tournament, but in Prague, there is no evidence of that. Feyenoord from Rotterdam, the Netherlands, is playing the Prague-based Czech team Slavia today and the stakes are high: a ticket to the semi-final.

Feyenoord fans who traveled to see the first game of the league in Pristina, Kossovo were criticized ‘why would you travel to watch such an irrelevant competition?’, but by the time the Rotterdam fans passed by Borås, Berlin, and Belgrade to see Feyenoord win, there’s been a run on the tickets for the quarter-final in Prague. If

you have a chance of winning the Conference League, it does not seem such an irrelevant competition anymore.

The home game in Rotterdam last week against Slavia finished spectacularly 3-3. Tonight’s winner will fetch the ticket for the semi-final, it’s Feyenoord’s chance to be in a European semi-final for the first time in 20 years. Feyenoord coach Arne Slot is confident and said with a smile, “We believe in it.“

It’s not the first time Feyenoord meets Slavia in the Conference League. In November Feyenoord played a draw against Slavia in the Sinobo Stadium. Both made it to the quarter-final and after drawing lots it became clear the teams were set for a reunion in Prague in April. But the municipality of Prague is less excited about welcoming the Feyenoord fans again.

Feyenoord fans are known for misbehaving when traveling abroad to see their team play. The Czech police wrote in an official statement that they heavily condemn the supporters who participate in these activities.

But before today’s match, the Rotterdam club had an issue with riots and fireworks in Belgrade, which brought the total fine for Feyenoord this season for misbehavior by supporters to over 400,000 euros. For a moment it wasn’t certain if Feyenoord supporters were allowed in the stadium against Slavia tonight. The European soccer federation UEFA made the decision to only allow 1000 Feyenoord fans to come to Prague to watch the game.

The first fans arrived Wednesday in Prague to warm up for the important game. The Feyenoord ‘Hand in Hand’ song resounded in every pub in the city center and Duplex, a big nightclub, was taken over by the supporters of Rotterdam. After a trouble-free evening and night, according to the police in Prague, the sun-drenched Old Town Square welcomes the Feyenoord supporters today to prepare for the game.

Already from early in the afternoon, the stands from the Easter market draft beers and grill sausages for the fans, the spirit is high to see the ‘most important match of the season, according to the fans.

Listen here to an audio reportage about the atmosphere on Old Town Square before the game. “I think Czech society could be more open-minded and friendly”

Worth Czeching Out: Třebíč 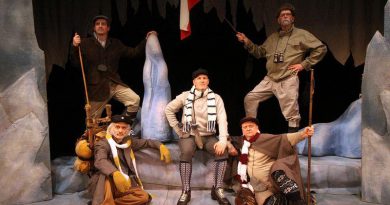 Jára Cimrman: Another play of the greatest Czech now in English