Four professional journalists from four different European countries spoke on the topic of public service media in Central Europe. The discussion took place on 17th of November in the FSV Hollar building as a part of Prague Media Point, a conference of professionals designed to discuss the most pressing matters of journalism and media.

The debate opened with Gábor Kardocs, a Hungarian journalist, emphasizing the importance of public service media by describing the situation in his home country. The main message of his speech revolved around the fact that there is only one Hungarian news agency, which is owned and financially and politically controlled by the government. That means there is only one source of news available in Hungary and that source is heavily focused on the propaganda of the regime.

Piotr Pacewicz, the editor-in-chief of the Polish Oko.press, shared the same sentiment – in Poland the state-owned television channel TVP is trusted almost exclusively by PiS voters (PiS being the governing party that owns the television), which results in a similar cycle of propaganda. PiS voters are on average older and less educated, and their main source of information is television, which makes TVP a one-party television, according to Piotr.

Things are different in Germany, according to Patrick H. Leusch of Deutsche Welle. He described the way media boards in Germany defend themselves from political influence. Because the boards in Germany are composed in a way that reflects the diversity of German society, it is hard to steer the media in one specific political direction, he said.

Zuzana Kovačič Hanzelová, a journalist from Slovakia, countered his point by saying that while there is a system of boards in Slovakia as well, it did not prevent the prime minister from calling the CEO of her media outlet and asking him to fire her. In the end, she stated, the integrity of the people in these systems is what is most important, not the systems themselves.

The debate closed with a Q&A session where the speakers agreed that the main focus of journalism should be fighting the lack of information – explaining to the people why these issues are very significant to their day-to-day lives. 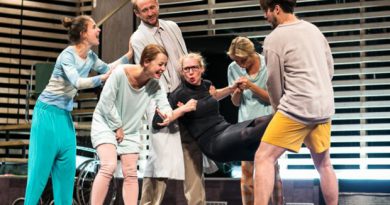 Švandovo divadlo presented a play that isn’t for everyone 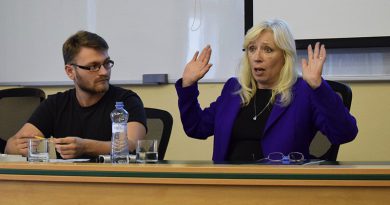 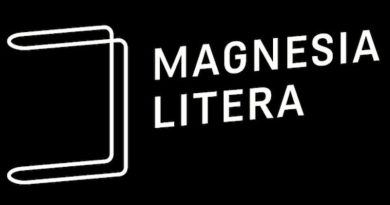